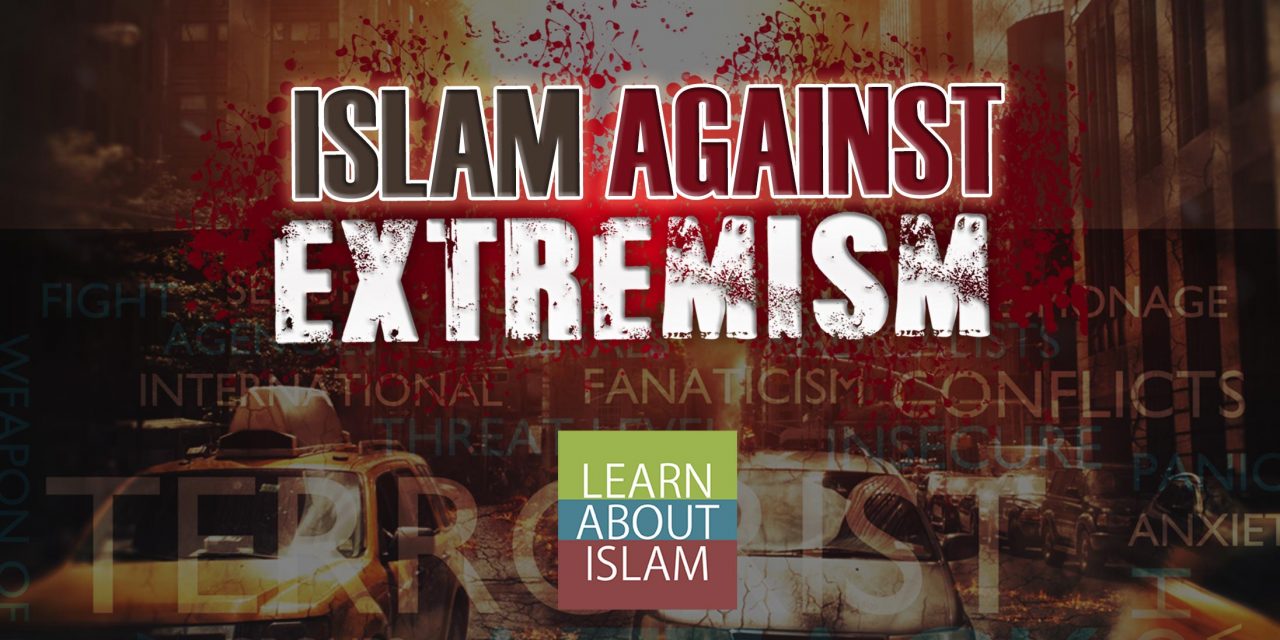 The salaf were the furthest from the acts of insurgency and treachery from the terrorists. It is not something that can be ascribed to any of the religions, let alone the religion of Islaam.

Shaykh Abdul Muhsin Al Abbaad: “How can the acts of terrorism; taking of lives, destruction of property etc. be attributed to any religion?”

Shaykh Ahmed An Najmi: “When a person puts on an explosive jacket, and sits in a car that drives slowly in the streets up until it enters a crowd of people, not expecting to die, nor expecting what is to come. Then blows himself killing dozens of people around him. What greater act of treachery is there than this?!”

When you look at the actual message of Islam you realise it is a religion that holds onto its promises, keeping to its covenants. It is not a religion of betrayal and treachery, neither on a personal level nor on a societal level.

The Prophet described the traits of the hypocrite: “When he is given a trust, he breaks his trust.”

From the goals of Islaam is to get rid of betrayal and hypocrisy. The people think they are living in security, that you are a peaceful person, then you kill them. This is a great treacherous act! The Khawaarij – a deviant group – were foretold by the Prophet Sallallaahu Alayhi Wa Sallam. He mentioned the fact that they are killers, he mentioned their treachery. He said about them: “Their prayer, their recitation of the quran and their fasting will make yours seem insignificant. But they will recite the Quran and it will not go past their throats.”

They display Islam openly but they hide their hypocrisy. They claim they have license and justification for their terrorist acts from the Quran and the Sunnah. If you were to take the words of Allaah from the Quran, then twist, misinterpret and change their meanings, then it cannot be called revelation from Allaah, rather it is false interpretation. For example, if you take a verse where Allaah directs speech to the rulers, and how they should deal with warfare, then you apply it to the everyday person. You have now taken the meaning of the ayah and applied it to the one it isn’t related to!

In every society, you find structures and rules established in order to declare war, pass judgements upon criminals, gather armies to defend the borders etc. These are all for the people of authority to decide. Islam likewise is not devoid of these structures and rules. In fact, Islam is the furthest of all societies & religions from disorder and chaos. It is a religion of rules, regulations, hierarchies. It has courts, governments, apparatus of states, ministries, etc.

“When he would appoint an Ameer (a general) over an army, or expedition force, he would enjoin upon him the fear of Allaah and to be dutiful to Him and to treat those in his army with goodness.”
(Muslim)

We see that the Prophet Sallallaahu Alayhi Wa Sallam – as the muslim ruler – used to establish order within his nation.

“Don’t prove treacherous with regard to your treaties”

He used to command not to kill ambassadors from other groups, even from the greatest of his enemies.

If you go to any country where these terrorists (Al Qaedah, Houthis, ISIS, etc) have come out from, then you find the bulk of those who are killed are muslims, attempting to live their lives, going out to the marketplaces, work, etc.

Only a person with a misguided heart, or complete lack of intellect would support these kinds of actions.

Ibn Katheer (D774H): “If they (Khawaarij) gain strength, they would surely corrupt the whole of the earth – Iraq and Syria (Shaam). They would not leave a baby, not a male nor a female, alive. Because the people have caused corruption on the earth (according to their belief) and this corruption cannot be removed except by the mass murder.” (Al Bidaayah Wan Nihaayah)

It is as though he is alive today talking about the Khawaarij of today, whilst in fact he died 700 years ago! Such is the nature of the Khawaarij in every time.

The killing of the Khawaarij is worse than the killing of the sinner. The sinner would never say “ I have a license from my Lord, the Lord of the Worlds” as the Khawaarij will – and do – say. They believe that when they die they will be in Paradise, whilst the opposite is true. As the Prophet said that they are the “Dogs of the Hellfire”.

You can see how the Khawaarij were treated by the muslims at the time of the companions of the Prophet Muhammad Sallallaahu Alayhi Wa Sallam. They were made an example of and they were executed by the rulers.
Hadith:

“Whomsover kills the one with whom there is a covenant, then he will never smell the scent of Paradise”

(Reported by Bukhari, Ibn Maajah & others)

Look at the difference between what they say and think about themselves, and what the Prophet said about them. They think they will kill someone and go straight to Jannah, whilst the Prophet Sallallaahu Alayhi Wa Sallam said that they will not even smell the scent of Paradise whilst its scent can be smelt from 40 years distance!

Not once did he ask the religion of his parents! Yet today we have teenage girls, stealing money from their parents and leaving for the so called “Islamic State” because of the rulings given to them by the Khawaarij, allowing them to travel without a mahram, telling them to remove their hijab, encouraging them to steal from their parents. Look how far they are from the religion!

They are the ones who killed Uthmaan RadhiAllaahu Anhu. They besieged him in his house when the companions had gone for Hajj whilst he stayed behind due to his old age. They surrounded him in his house, then broke in to his house and stabbed him to death. They are the ones who killed Ali RadhiAllaahu Anhu. Abdurrahman Ibn Muljam waited for Ali to come out from his house to lead the salah. He had laced a knife with poison and then ran at him, swinging the knife at his head. If the Khawaarij can deal with the Messenger of Allaah Sallallaahu Alayhi Wa Sallam, Uthmaan and Ali RadhiAllaahu Anhuma then how do you think they will deal with the rest of the muslims?! Those who are deceived by them are just lowly criminals. Criminality is part and parcel of who they are. They are told they can continue their criminality and in fact they will be rewarded for it! This is all because they would interpret the Quran based on their desires. When they are faced with knowledge they have no response. This is why they hide in the shadows, targeting naive teenagers. You will never find any scholars travelling to them.

In the time of Ali, a group of 20,000 of them broke off as an insurgency, so he sent Ibn Abbaas to debate them. The first thing he said to them was : “I have come from a group of people who amongst them the Quran was revealed (I.e. the companions) and I do not see a single one of them amongst you!” This shows how shallow they are in their arguments, all they can recruit is teenage boys and girls, cheap fodder for their battlefields.

Ibnul Jawzi (D597H): “They made halal the blood of children yet they did not allow the eating of any fruit of a tree without paying for it first. They believe that Ali was wrong and those who were with him from the Muhajirin and Ansar were wrong and only they (Khawarij) are upon the truth.”

How similar is this to today?!

Makkah and Medina are not safe from the treachery of the Khawaarij. Not even the companions of the Prophet were not good enough for them.

“The Prophet Sallallaahu Alayhi Wa Sallam said: There will appear towards the end of time, a people young in age foolish in their thoughts. They will speak with the speech of the best of creation (with eloquence). But they will leave Islam just like the arrow passes through its target. Their faith will not pass beyond their throats. So wherever you find them, then kill them, for there is a reward for their killers on the Day of Ressurection. (Bukhari)

The counter terrorism forces in the muslims lands are an application of this hadith. The Khawaarij are rabid killers, they will be driven to insanity. They will speak with nonsensical speech.

Their recitation of the Quran is a proof against them, it is not a proof for them.

Shaykh Bin Baaz said regarding the Jamaa’at (groups)of Jihaad: “They are not to cooperated with, nor are they to be given the salutations of salam. They are to be cut off from, for indeed they are the brothers of the devil.”

He also said: “That which is apparent from the Ahadith (Prophetic Narrations) is that they are disbelievers.” 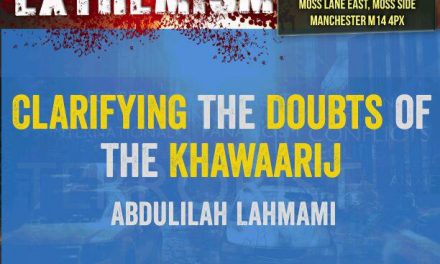 Clarifying the Doubts of the Khawaarij | Abdulilah Lahmami | Manchester 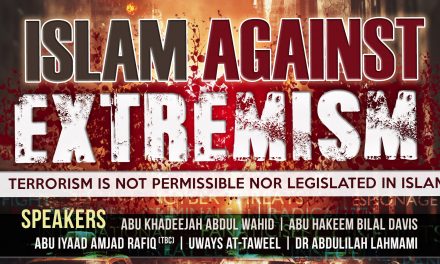 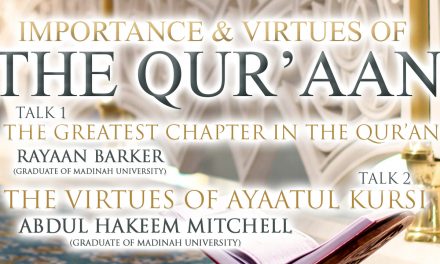 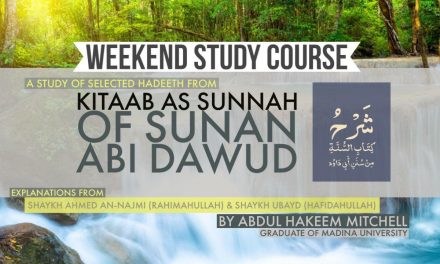