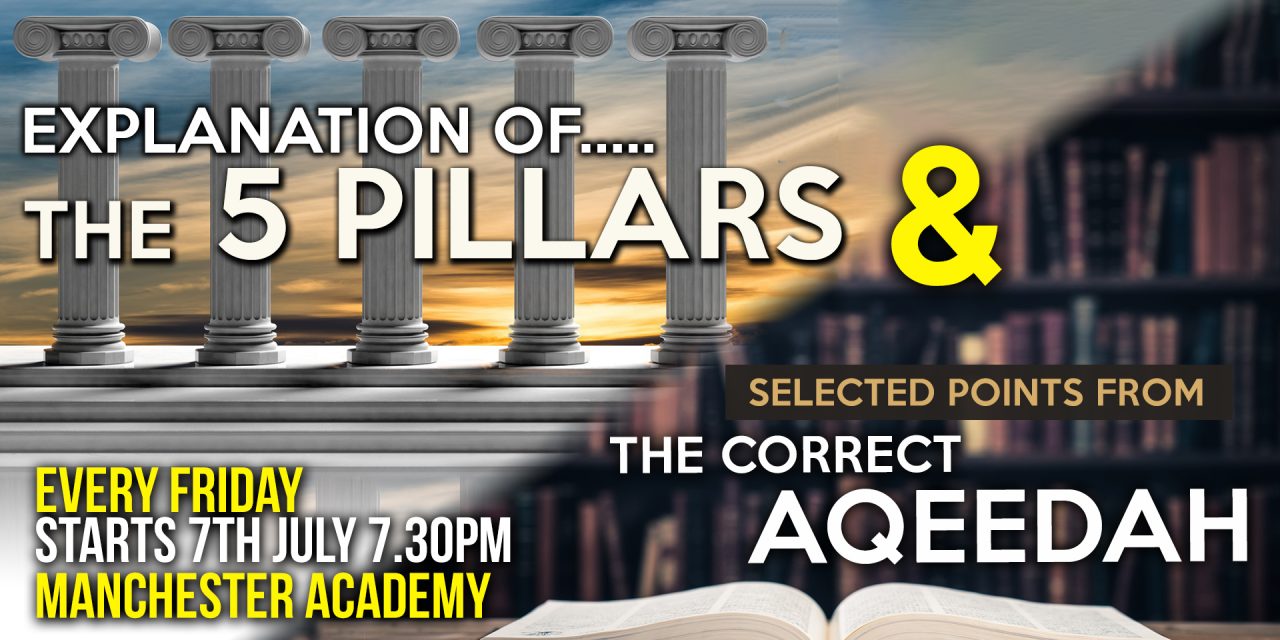 The 6 Pillars of Eemaan

The third lesson from the “Important Lessons for the Muslim Ummah” of Shaykh Bin Baaz is the Pillars of Eemaan.

The 6 pillars are to believe in:

6) Qadr (Divine Predecree) – its good and its bad

A person’s Eemaan cannot exist without firstly believing in these 6 pillars.

These are the principles that all of the Prophets were united upon. They all agreed in calling to these 6 pillars. Their call focused on these foundations.

“The Prophets are brothers from one Father. Their mothers are different but their religion is one.”

Meaning; Their ‘Aqeedah is one but their legislations may differ.

The affairs of belief do not have any abrogation, i.e. the usool (foundations) of the Prophets were all the same and have never been abrogated.  The only matters that abrogation entered into were the legislations and the rulings.

“And for every one of you (of the Prophets) we made for him a legislation and a way to follow (i.e. a sunnah)”

You cannot separate the pillars from each other, you must believe in all of them. They go hand in hand. The one who believes in some and not in others cannot be called a believer.

In the Qur’an we find many ayaat affirming these six pillars, for example:

“Who believe in the Ghaib and perform As-Salat (Iqamat-as-Salat), and spend out of what we have provided for them [i.e. give Zakat, spend on themselves, their parents, their children, their wives, etc., and also give charity to the poor and also in Allah’s Cause – Jihad, etc.].”

“And who believe in (the Quran and the Sunnah) which has been sent down (revealed) to you (Muhammad Peace be upon him) and in [the Taurat (Torah) and the Injeel (Gospel), etc.] which were sent down before you and they believe with certainty in the Hereafter. (Resurrection, recompense of their good and bad deeds, Paradise and Hell, etc.).”

All of these pillars are related to the “Ghaib” (the unseen). To believe in the unseen is to oppose the norm as it relates to having belief in something. Typically, belief returns back to the 5 senses:

Normally, one will not believe in something unless at least one of these senses is present. However, the belief in the 6 pillars requires belief without these 5 senses. This is why having Eemaan in them is something tremendous.

Allaah says, once again in Surah Al Baqarah, as it relates to the reality of Eemaan:

“It is not Al-Birr (piety, righteousness) that you turn your faces towards east and (or) west (in prayers); but Al-Birr is (the quality of) the one who believes in Allah, the Last Day, the Angels, the Book, the Prophet’s”

and also in Surah Al Baqarah:

“The Messenger believes in what has been sent down to him from his Lord, and (so do) the believers. Each one believes in Allah, His Angels, His Books, and His Messengers. They say, “We make no distinction between one another of His Messengers” – and they say, “We hear, and we obey. (We seek) Your Forgiveness, our Lord, and to You is the return (of all).””

Regarding the above verse (The second to last verse of Surah Al Baqarah) and the verse that follows it, the Prophet Sallallaahu Alayhi Wa Sallam said:

“Whoever recites the final two verses of Surah Al-Baqarah at night, they will suffice him “
(Bukhari and Muslim)

This is because in these 2 ayaat is a reminder of the pillars of Eemaan and as a result it is a renewal of ones Eemaan as the Prophet Sallallaahu Alayhi Wa Sallam informed us:

For this reason, the mention of Belief in Allaah comes first, except in a few places, for example:

The reason it wasnt mentioned first in this case was because enjoining Al Ma’ruf and forbidding Al Munkar was the distinguishing factor between this nation and the others, as the Christians and the Jews believed in Allaah aswell.

Belief in Allaah consists of 3 pillars:

1) To believe in the Oneness of Allaah in His Lordship (Ruboobiyyah) – to single out Allaah in His Actions (Creating, Sustaining, Maintaining the Affairs, etc)

“Say: “Invoke Allah or invoke the Most Beneficent (Allah), by whatever name you invoke Him (it is the same), for to Him belong the Best Names” 17:110

As it relates to the Names and Attributes of Allaah, we have 4 key principles; We do not 1) Ask “How?” (Takyeef); 2) Liken them to creation (Tamtheel); 3) Distort the meaning (Tahreef); 4) Render them futile (Ta’teel)

“And they were commanded not, but that they should worship Allah, and worship none but Him Alone (abstaining from ascribing partners to Him), and perform As-Salat (Iqamat-as-Salat) and give Zakat, and that is the right religion.” (98:5)

This 3rd and final pillar (Uloohiyyah) was the reason the Prophets fought with the Mushrikoon. As this was the point of differing between the believers and the disbelievers.

In next week’s lesson we will move on to the Belief in the Angels bi’ithnillaahi ta’aalah. For the full benefit of this lesson, listen to the audio. BaarakAllaahu Feekum. 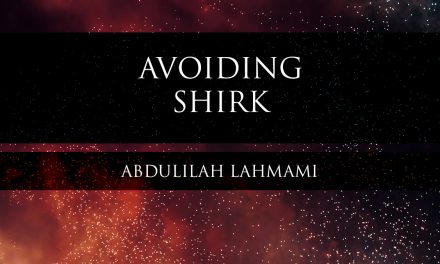 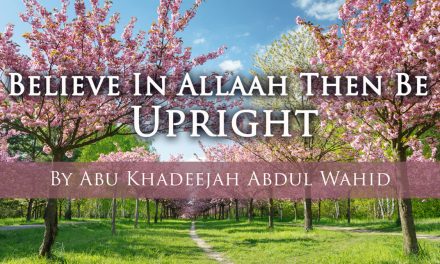 Believe in Allah then be Upright | Abu Khadeejah